This article originally appeared on the Chatham County Schools website.

The district received approval to contract with Conterra Networks for 88 miles of fiber-optic networking that will increase bandwidth tenfold while connecting all of the school system’s campuses under a single internet provider.

“Prior to this, we had contracts with three separate internet service providers, and it was increasingly apparent that they couldn’t meet our needs,” CCS Chief Information and Technology Officer Keith Medlin said.

The dedicated lines of optical fiber from Conterra will give the school system greater control over how fast information is delivered to devices used for teaching and learning throughout the district. The installation is scheduled to begin later this year and, barring regulatory or weather-related delays, is expected to wrap up this time next summer.

“This is a game-changing project that has been 18 months in the making, and we are excited to ensure that our schools remain on the cutting edge,” Medlin said.

Medlin secured discounts from the federal government and picked up contributions from the state of North Carolina that will deliver at no charge to CCS what would have amounted to a $2.4 million fiber installation. The upgrade will not significantly increase the district’s monthly expense for fiber-optic networking, Medlin said.

While the new network will serve the district’s schools, one of the reasons CCS partnered with Conterra had to do with the company’s commitment to increasing the availability of high-speed internet throughout the county for both residential and business use. Medlin has been collaborating toward that end with Darlene Yudell, who oversees information technology for Chatham County.

“The project remains in the engineering phase right now as the final permitting and pre-construction tasks are completed,” Medlin said. 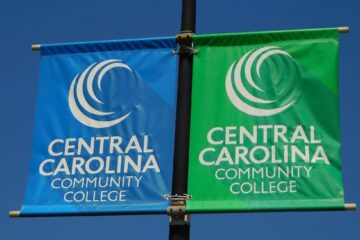